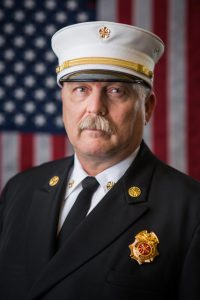 Chief James Trube was promoted to Fire Chief for the Village of Tequesta on November 16, 2018.  Jim has honorably served the Village residents since August 2, 1993 when hired as one of the first Fire Lieutenants.   Jim transitioned through the ranks and was quickly promoted to Captain, and then for a period served as the Fire Operations Chief. During his service with Tequesta Fire Rescue, he was assigned as the department’s Training Officer, EMS Coordinator, Logistics Officer, Safety Officer, Special Operations Coordinator and Communications Officer and has been placed in charge of numerous special projects.

Chief Trube began his career with the Stuart Fire Rescue in November 1988 where he served as a Fire Fighter II – Driver/Operator. During his time with Stuart Fire Rescue, he received the American Heart Association Dedicated Community Service Award for Teaching and he was nominated for the Martin County Today Hero Citation Award for being part of a Hurricane Andrew response team.   After transferring to the Village, he quickly gained the respect and admiration of his fellow and neighboring Fire Fighters earning him numerous honors and awards over the years, such as the Tequesta Fire Rescue Meritorious Service Award, Officer of the Year Award, and the Palm Beach County Professional Partnership Award. Chief Trube will also serve the Village of Tequesta as the Fire Marshall and Emergency Manager.