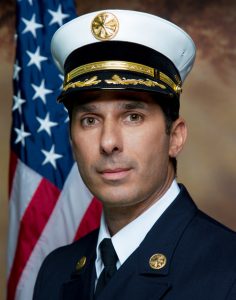 Doug McGlynn is the current Deputy Chief of Operations for Palm Beach County Fire Rescue. Doug is a member of the Command Staff for the Florida Forest Service Type II AHIMT on the Red Team. Doug is also a Liaison Officer for the Florida Region 7 AHIMT Type III Command Team and has deployed to the Florida Keys for Hurricane Irma as well as Oklahoma for the Arkansas River Flood disaster in 2018. Doug is a sitting member on the Board of Trustees for JFK Hospital. He has an AS Degree in Fire Science from Palm Beach State College, a BPA from Barry University and a Masters in Leadership from Palm Beach Atlantic University. Doug is a graduate of the ESLI (Emergency Services Leadership Institute) and is in Year III as an Executive Fire Officer (EFO) student at the National Fire Academy.